Mountains, plains, plateaus, soils, rocks, etc. as we see them today, are believed to have gone through many phases, with about 80% of it being carved by the action of volcanoes. 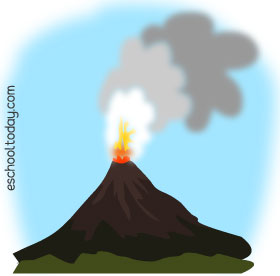 A volcano looks like a mountain, although they are two different things. A mountain is a natural rise of the earth’s surface, more like a giant heap of sand. A volcano is also like a big heap of the earth, just that this heap is a mixture of lava, ash, dust, and other substances that have piled up over many years. It pours out of an opening in the earth after an eruption. This means volcanic eruptions or explosions can create elevations that we can call mountains.

In May 1980, the Mountain St. Helens, in Washington USA, May 1980, erupted or exploded, and it was an awesome natural occurrence because it destroyed some parts of the landscape around it but at the same time it was a beautiful sight.

Volcanoes occur at weak zones or points in the earth’s crust (including constructive and destructive boundaries). They do not occur at conservative boundaries (transform plate margin).

A bit of history:

In A.D. 79 (really long ago) two Roman cities, Pompeii and Herculaneum, were completely buried in ash and dust in a matter of hours after a volcanic eruption. Their remains were not uncovered until modern archaeology made that discovery 1700 years after. (you can do your research into this event)

The word volcano was derived from the name of a Roman god of a small island in the Mediterranean sea of Sicily called Volcan.

The biggest volcano in the world is Mauna Loa in Hawaii. Its whole volume is about 80,000 cubic kilometers.

Constructive boundary
A weak zone in the earth’s crust where two tectonic plates are moving away from each other. They are also called divergent plate boundaries.

Destructive boundary
A weak zone in the earth’s crust where two tectonic plates are moving towards each other.