What does cloning mean in genetics?

To clone something means to duplicate (or make an exact copy of something). Genetically, cloning is the creation of an exact copy of another organism. This means that the DNA of the cloned organism is the same as the original.

Cloning can be natural or artificial. A good example of a natural clone in humans is when the sex cell divided itself during fertilization to produce twins.

In animals, the process of artificial cloning is even more interesting.

Let us use a cow as an example. 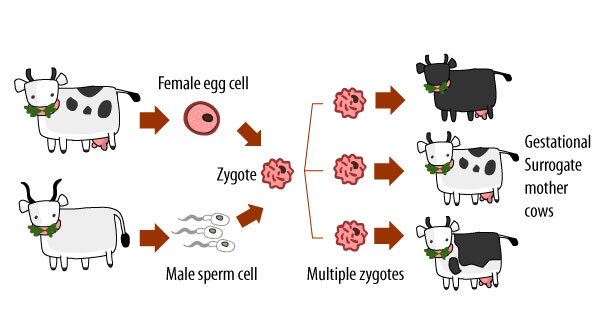 Scientists can take the sperm of the male cow and the egg of the female cow and fertilize them. They split the zygotes into several parts and place them into the wombs of new females to carry them. All the calves that are born will have the same DNA and traits.

Is cloning a good thing?

Many people argue that natural reproduction should not be interfered with. Even though cloning can produce animals and plants with the best or desired characteristics quickly, individuals may be prone or susceptible to disease. The process will also lead to less variation, which is a very natural flavor of life.