How do landslides form?

Whenever there is a natural disturbance or instability in a piece of land on a hill, slope, mountain, or generally upland area, there is a potential of a landslide. This is because the material of the hill is held in place by its natural bonding and the gravity acting on it. That means when the earth material loses its bonding either through weathering, erosion, or too much water in the bedrock, the weight of the overlying rock will give way, and gravity will pull the earth downhill. 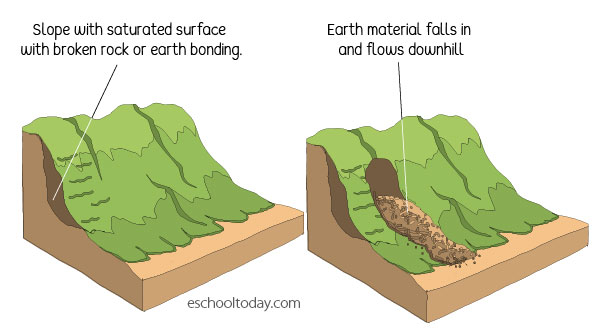 In this illustration above, you notice (A) that the hill was held in place by its natural bonding. After too much water in the earth, the bonding is broken up, and the earth falls in (B) due to gravity.

Natural disasters such as floods, earth movements (earth trembles, earthquakes, and volcanic activity) can also set off landslides as they all have the potential to break up earth material.

The possibility and scale of landslides usually depend on these conditions.

Landslides and mudflows flow faster on steeper slopes and can be more destructive.

When more water accompanies landslides, they travel farther and faster. More water is even more destructive as the pressure and power of its eroding force are more.

Generally, hills and mountains stay in place if nothing bothers them. When earthquakes, tremors, and volcanoes occur, they shake the land and disturbs the boding of the bedrock. When this happens, landslides are ripe.