The types of landslides are usually differentiated by the nature of their movement and earth material involved. Here are a few:

In a topple, the earth mass rotates forward about a pivot. The result is usually a tilt without collapse. Usually, it is caused by cracks or fractures in the bedrock.

These are usually influenced by gravity after large rocks or boulders get detached from their parent rock. They tend to fall along steep slopes or cliffs.

Flows come in many types, such as Debris flow, Debris avalanche, Mudflow, Creep, and Earth flow. 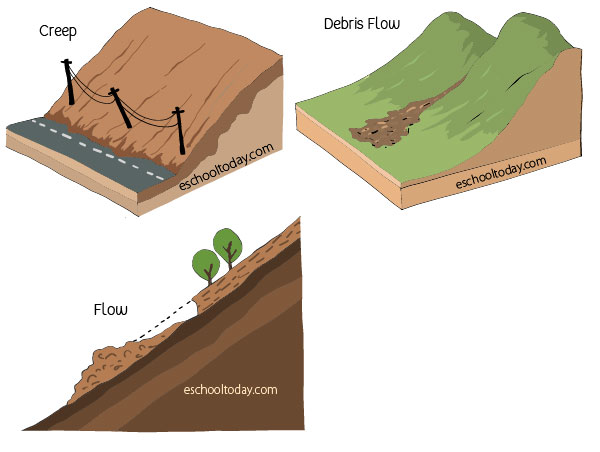 Debris flow involves the rapid downhill movement of loose earth material, usually with water. Debris Avalanche is similar to Debris Flow but has a faster flow. In an earthflow, the earth material is finer and washed away leaving a depression bowl at the head. Mudslides are made of fine silt, sand, and clay material saturated with water and flowing very rapidly. Creeps are slower and can be evident when electric poles and roads bend slightly.

These are a very sporadic discharge of water and debris, often along low-lying channels between highlands.