What is an electrical circuit?

Below is a basic set of symbols that you may find on circuit diagrams.

Note the parts of a simple circuit and the symbols that relate to them. A simple circuit has conductors, a switch, a load, and a power source. Here are the functions of each part:

Switch:
The switch is simply a small gap in the conductor where you can close or open the circuit. When the switch is closed the circuit is closed, and electricity flows.

The Load:
The load is a small light bulb or buzzer that lights when the circuit is turned on. The load is also known as a resistor.

Cell:
The power source is a cell. (More than one cell put together is known as a battery)

The diagram below shows how a basic circuit looks like. 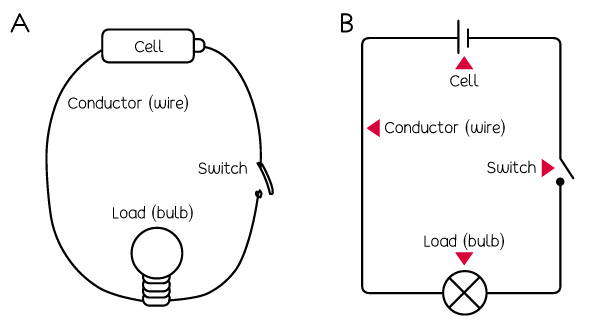 It is important to draw circuits with clean straight lines, as shown in diagram B. Avoid realistic sketches. A circuit can have more than the basic components in the diagram. It can have two or more batteries or two or more bulbs.

There are two types of circuits, namely Series Circuit and Parallel Circuit.