Different fires are fought differently, but the big idea is usually identical — to deprive the fire of its fuel and let it go out by itself. It can be achieved in many ways as below:

Firefighters look for a natural edge or boundary, such as a road, stream, or plain field, and they do a controlled burn of all the fuel between the barrier and the fire. It means that before the fire gets there, it would have already burned out. 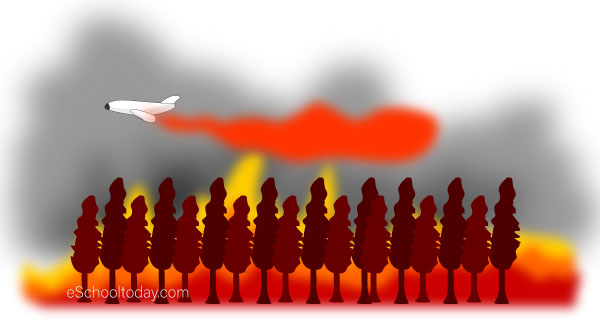 Special aircraft called air tankers fly over the fire and dump water, fire retardant (eg. the pink colored one is called jelly-o), and chemicals (foam) on the fire. An example of such a chemical is ammonium phosphate. Sometimes suspended buckets of between 100 to 2000 gallons carry water and sprinkle it over the fires. In some developed countries, special pilot-less air tankers controlled by computers do this job so that no human is put in harm’s way.

These days, satellites, computers, aircraft, and digital equipment are used to monitor fires, forecast wind directions, and create instant and effective maps and information needed to fight fires. It makes it a lot easier and quicker for firefighters to contain and put out fires.

Trained firefighters are essential to fighting fires. They get into gear (wear oxygen masks, appropriate fire-proof clothing) and carry important tools on them to fight fires. One good fireproof material used in their clothing is called Nomex. Sometimes they also carry fire shelters if they get close to fires. A fire shelter is a fire-proof tent that can protect a firefighter from extreme heat in case they are trapped by the fires.