Threats to pollinators and pollination

Any phenomenon that adversely affects the health, life, conditions of pollinators will be called a threat. These phenomena may be natural or human-caused. Here a few: 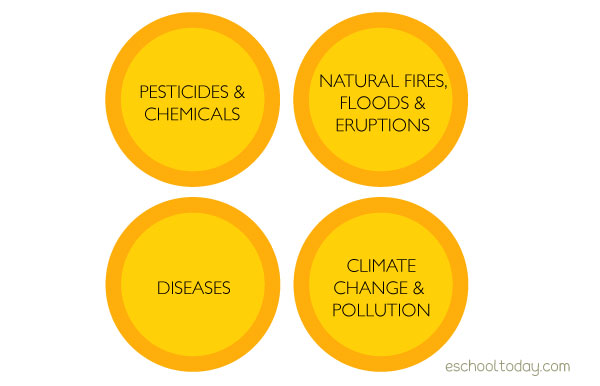 Natural fires, floods, volcanic eruptions and the like can potentially wipe out pollinators and their habitats. They can also degrade and fragment wildlife habitats such as homes (hives for bees), feeding sources and places, sites for mating, nesting, and the environments in which they survive.

“The destruction and fragmentation of pollinator habitats have led to significant declines in many populations. At least 185 species of pollinators are considered threatened or extinct by the World Conservation Union (IUCN), and at least 2 bat and 13 bird species listed as endangered in the United States are pollinators”

Man-made projects such as farming, urbanization, road construction, and industrial development contribute to the destruction of vegetation and long-established pollinator habitats.

The improper use of pesticides, insecticides, and weed killers by farmers and private home users can adversely affect pollinators and their habitats too. These chemicals often destroy living organisms that play different roles in the survival of vegetations.

Sometimes species of certain plants and animals are introduced to a population as a biocontrol measure. Unfortunately, these aggressive species have taken over and competed vigorously with native species.

Water and air pollution often affect the habitats of pollinator populations. This is also true for climate change, as extreme climate conditions are making it hard for pollinators to thrive.