What will happen if a person cannot feel, see, hear, smell or receive any form of signal from its environment? In many instances, if a person loses one or two of his senses, the remaining senses tend to be very sharp and can use those to survive.

Our five senses, sight, smell, touch, hearing, and taste, play unique roles. These senses are controlled by organs such as the eye, ear, tongue, and so on. Organs are activated by very tiny things called neurons. Let us briefly see the role neurons play in our bodies.

Neurons are tiny units in our body that process data (electrochemical signals) to and from the brain. Some neurons (belonging to a network) connect and add up their signals before they send it to the central nervous system and then to the brain.

The illustration below shows the basic structure of a neuron. 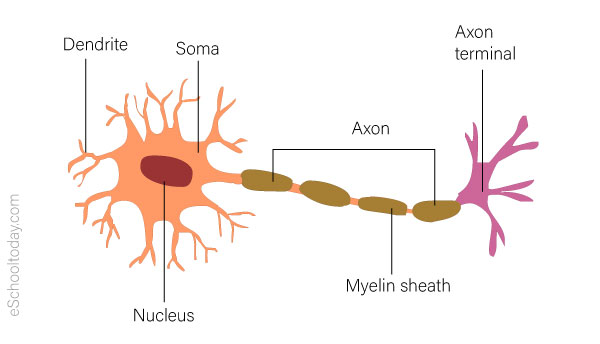 Here is how a neuron works:

Many dendrites receive impulses and join up in the soma. If the signal is strong enough to become an electrochemical signal, the signal passes through the axon and the axon terminal. Here, it connects with many other neurons in the network, and together, they send the bigger signal to the brain.

Special neurons, called sensory receptors, do not receive impulses from other neurons but can receive stimulation such as light, sound, heat, and pressure directly from the external environment. When more of such impulses are received, they are added up to form an electrical discharge (electrochemical signal). This electrical discharge is also known as an action potential. Then, they transmit the electrochemical signal to other neurons in the network. It is why they are called sensory receptors.

Sensory receptors are contained in specific organs. In the next pages, we shall see a bit more about how receptors work in each organ.