What is Renewable Energy?

Energy exists freely in nature. Some of it exists infinitely (never run out, called RENEWABLE), and the rest have finite amounts (they took millions of years to form, and will run out one day, called NON-RENEWABLE)

With this in mind, it is a lot easier to lay any type of energy source in its right place. Let’s look at these types of energy in the diagram below:

You will notice that water, wind, sun, and biomass (vegetation) are all available naturally. Humans did not create or manufacture them. The others do not exist by themselves — they were extracted in some way from nature by humans. Renewable energy resources are always available to be harnessed. They will not run out. That is why some people call it Green Energy.

Approximately 20% of electricity produced globally in 2009 came from renewable sources. Out of this, hydropower accounted for about 16%.

Developing countries continue to invest more in renewable energy. The diagram below shows the approximate amounts of investment in the sector since 2012. 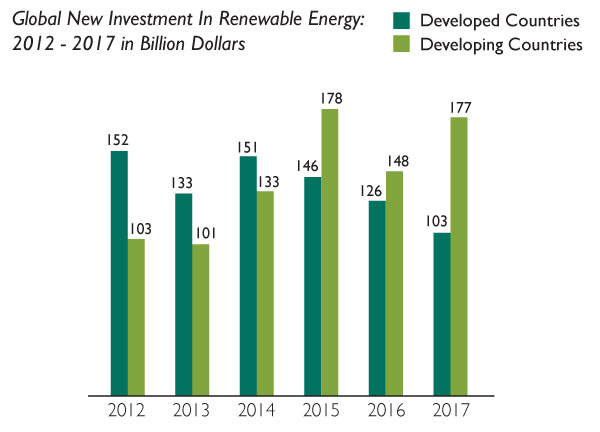 When can energy be called ‘Renewable’?