What is an Element?

An element is a substance made from only one type of atom. For example, Oxygen (O2) is an element made up of ONLY oxygen atoms. To understand this better, let us see how atoms behave. 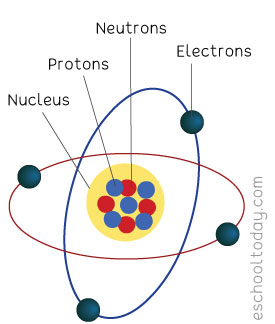 Every element is made up of atoms. Atoms are the smallest piece that can exist in an element. You will need to put millions of atoms together to get an element of about half a millimeter in size. An atom is made up of ‘Electrons, Protons, and Neutrons’.

The diagram on your left is an illustration of an atom. The center part is the nucleus.

Atoms in some elements do not join up with other atoms of the same element. An example is Helium. Helium atoms exist alone and can look like this:

Some atoms can also join up with other atoms of the same element. When two or more atoms join up, they form a molecule. Oxygen, (O2) is a molecule because it has two atoms joined together. An oxygen molecule looks like those in the diagram above.

Elements are naturally pure. They may vary in size as long as the atoms joining to make its molecules are the same. As soon as a different atom joins the element (bonds), it ceases to be an element — it is now a compound.

Sometimes, atoms can join up with other atoms of other elements in chemical bonds. When that happens, a compound is formed. This means that a molecule can be made up of two atoms of the same element, OR can be made up of more atoms of different elements.