Birth (baby comes out of the female's womb)

After nine months the baby is fully developed and ready to be born into the big wide world. The baby at this stage weighs between 6-8 pounds. Some babies are smaller (4-6 pounds), and some are bigger (more than 9 pounds).

When the time is right, the cervix relaxes, and muscles in the wall of the uterus contract. This contraction forces the baby through the cervix and out of the mother’s body.

The umbilical cord is cut by the doctor to separate the mom from the baby. Tadaa… a newborn baby is here!

What about twins? How are twins made?

There are two types of twins. Identical and non-identical twins.

In non-identical twins, the mother released two different egg cells, one in each tube. In this case, two sperm cells would fertilize them and produce two zygotes. Because they are from two different eggs, they tend to have clear differences among them when they are born. The scientific name for this kind of twins is dizygotic. Non-identical twins are also called fraternal twins. 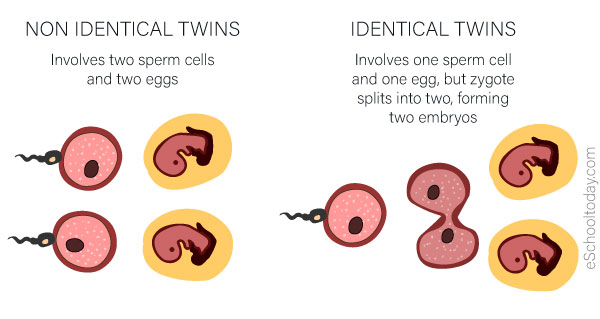 In identical twins, there is only one egg cell from the mother and one sperm cell from the father. Hours after fertilization, the zygote splits into two new zygotes. This means they will grow into two very similar fetuses and identical babies. The scientific name for this kind of twins is monozygotic. This kind does not happen often. In fact, identical twins make about 1/3 of all twins.