Introduction to The Earth System

When you think of the Earth, what comes to mind? Water, trees, animals, winds, rocks, and so on, right? Yes, all that is part of the planet we call Earth.

In the diagram below, we can see some examples of the things that make up the earth. 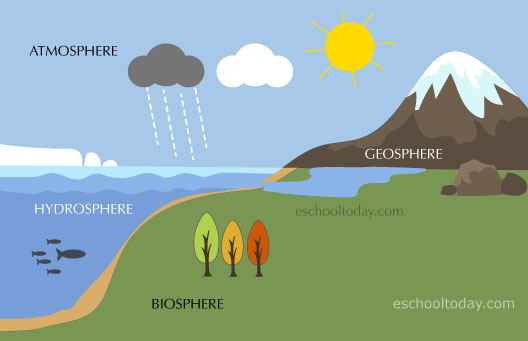 ATMOSPHERE: Air (made up of many gases)
HYDROSPHERE: Sea, lagoon, ice-sheets and ice-caps, rainwater, etc
BIOSPHERE: Fish, trees, and other life forms
GEOSPHERE: Rocks, mountains, sediments on the seafloor, etc

Earth is made up of all these things and is grouped into four main areas called spheres. These spheres are not static, which means they are constantly changing. For example, the atmosphere does not produce the same weather every day. We experience wind, rain, or sunshine differently every day. Living things such as animals are also born, while older ones die. Deep down the earth, there is molten magma (melted rock) that can be spewed put in the form of lava during volcanic eruptions. Sometimes, there are seismic movements in the earth’s crust which causes changes on the surface of the earth. So, you can see that there is always something going on in all the parts of the earth. It is dynamic earth.

What is a system?

A system is a term used for any complex whole, with smaller connected parts working together. Usually, a change or malfunction of one part can affect other parts of the system, and also affect the system itself. 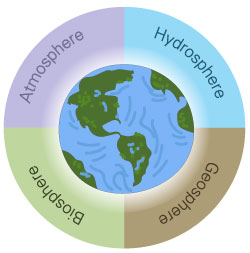 The Earth is a system too. It has four major parts all connected and working in harmony to make the planet function properly. These four parts are called Spheres. They are the Atmosphere, Geosphere, Biosphere, and Hydrosphere. Some studies also have the cryosphere (ice and snow) and anthroposphere (man-made objects and processes), but for this lesson, we shall focus on the four parts. Each sphere has its own function and it is constantly changing in a process called Cycles.

What is a Cycle?

A cycle is something that never stops. It has no beginning and has no end. An example is the water cycle, where the water goes through a basic journey: rains fall and end up in rivers, rivers end in the sea, seawater evaporates and forms rain clouds, and the rains fall again. Other important cycles include the carbon cycle, rock cycle, and nitrogen cycle.