Examples are all the rocks and sand particles from dry land to those found at the bottom of the oceans. They also include the mountains, minerals, lava and molten magma from beneath the earth’s crust.

The geosphere undergoes infinite processes constantly and that, in turn, modifies other spheres. One example of the continuous process is the rock cycle.

Consider the rock cycle illustration below: 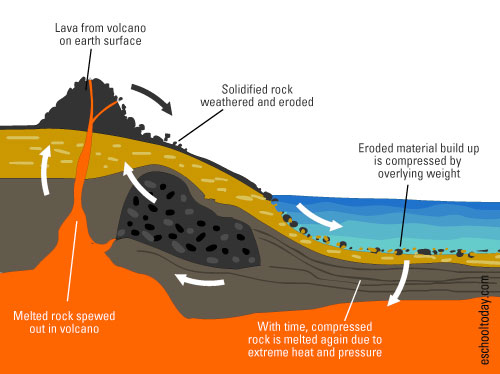 In the rock cycle, melted rock from below the earth’s crust is spewed out through vents on the surface onto the surface of the earth. This is also called lava. Solidified lava, together with other rock material from earth movements are weathered and eroded. The eroded particles end up somewhere and build up. After many years of buildup, pressure from the overlying weight causes the particles to modify itself again. They are further buried deeper in the crust and then melted again by intense heat until they are spewed out to the surface again.

In this cycle, you will notice that it can take thousands of years for the cycle to complete, but every single day has a role to play. You will also notice that the cycle does not complete on its own. It is influenced by other factors such as water, temperature, and wind, which also belong to other spheres.