What is the Ozone Hole?

Top atmospheric researchers confirm that Ozone levels vary by season and latitude. Sometime in 1979, it was observed that there was considerable Ozone depletion in the upper latitudes, Arctic and Antarctic. This massive stretch of ozone depletion (hole) is estimated to be about the size of America.

Particularly in the antarctic, satellite images were released showing a disturbing thinning of the ozone layer. The phenomenon is what we usually call the Ozone hole, and it was mostly observed over the Antarctic every year during the spring. 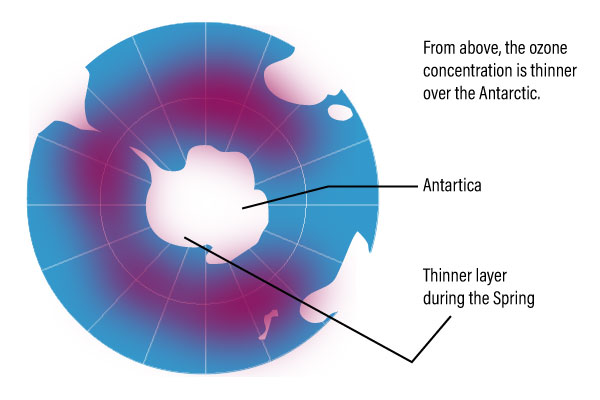 In the winter, temperatures drop below -78°C (-109°F) in the Poles (Antarctic). Thin clouds form ice, nitric acid, and sulphuric acid mixtures. Chemical reactions on the surfaces of ice crystals in the clouds release active forms of CFCs. This sets the ozone depletion going and by spring, a lot of depletion has occurred.

Why does the Ozone hole only occur in the Antarctic?

Researchers say it is not only in the Antarctic but in many places in other latitudes where populations are dense. It is believed that these places have cloud types that aid in the chemical reactions that cause ozone depletion.

In spring, temperatures begin to rise, the ice evaporates, and the ozone layer starts to recover.

What can be done?

Ozone is a natural gas and is naturally replenished over time. This means if we can do something to balance natural production with its depletion, there should not be a problem. Unfortunately, it does not work like that.

People ask if we cannot produce our ozone gas to replenish what is lost in the stratosphere. That’s a good question. The sun naturally produces ozone with immense energy and over time. To do the same, we will be looking at using immense energy too, about twice the energy used in the USA. That is just not practical.

The only way to do that is to remove the excess chlorine and bromine from the stratosphere. And the only way to do that is to stop making CFCs and several other chemicals. This is why in 1990 a meeting of the world’s developed nations met and agreed to reduce the usage of CFCs, and also encouraged other nations to do the same. That was decided in the Montreal Protocol. It was not enough, but at least it was a good starting point. It is always best to talk and discuss problems than to do nothing at all.