Ozone is a natural gas composed of three atoms of oxygen. Its chemical symbol is O3. It is blue and has a strong odor. Normal oxygen (O2), which we breathe, has two oxygen atoms and is colorless and odorless. Environmental scientists have classified O3 into two: Good Ozone and Bad Ozone. 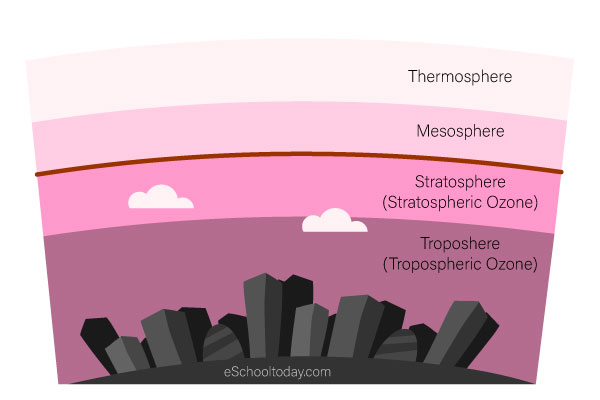 Good ozone (also called Stratospheric Ozone) occurs naturally in the upper Stratosphere. The stratosphere is the layer of space 6 to 30 miles above the earth’s surface.

Where does good Ozone come from?

The air is full of gases reacting with each other, even though our eyes do not see. When UV light strikes (Oxygen) O2 molecules, they are split into two individual O atoms — O and O. When one of the O atoms combines with the O2 molecule, Ozone (O3) is created.

Even though Ozone is only a small part of the gases in this layer, it plays a vital role because it shields us from the sun’s harmful UV rays. It is called Good Ozone, for obvious reasons—because it protects humans, life, and animals on earth.

Bad Ozone is also known as Tropospheric Ozone or ground-level ozone. This gas is found in the troposphere, the layer that forms the immediate atmosphere. Bad Ozone does not exist naturally. Human actions cause chemical reactions between oxides of nitrogen (NOx) and volatile organic compounds (VOC).

Where does bad ozone come from?

Each time there is a reaction of chemicals such as those found in cars, power plants, and factory emissions, in the presence of sunlight (UV light), Bad Ozone is created.

Bad ozone contaminates (dirties) the air and contributes to what we typically experience as smog or haze.

Note that this kind of smog is different from the deadly London winter type that killed 4000 people. Smog from bad ozone is usually in the summer, caused by the action of sunlight on a mixture of hydrocarbons and oxides of nitrogen. It is known as Photochemical or Summer Smog.