What is Ozone Depletion?

Ozone layer depletion is simply the wearing out (reduction) of the amount of ozone in the stratosphere. Unlike pollution, which has many types and causes, ozone depletion has been pinned down to one major human activity.

Industries that manufacture things like insulating foams, solvents, soaps, cooling things like air-conditioners, refrigerators, and takeaway containers use something called chlorofluorocarbons (CFCs). These substances are heavier than air, but over time, (2-5years) they are carried high into the stratosphere by wind action. 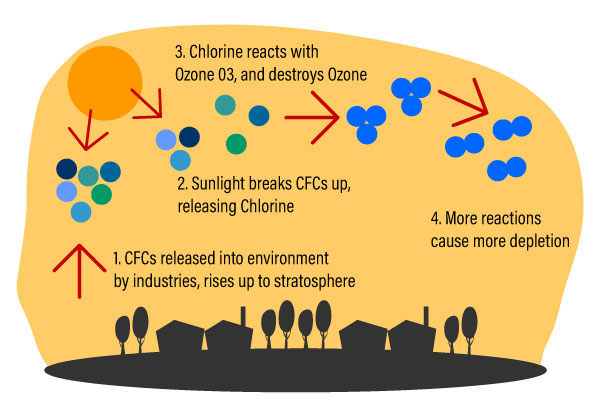 Depletion begins when CFCs get into the stratosphere. Ultraviolet radiation from the sun breaks up these CFCs. The breaking up action releases Chlorine atoms. Chlorine atoms react with Ozone, starting a chemical cycle that destroys the good ozone in that area. One chlorine atom can break apart more than 100,000 ozone molecules.

Ozone layer depletion is best illustrated or explained with the Ozone Bucket Analogy. 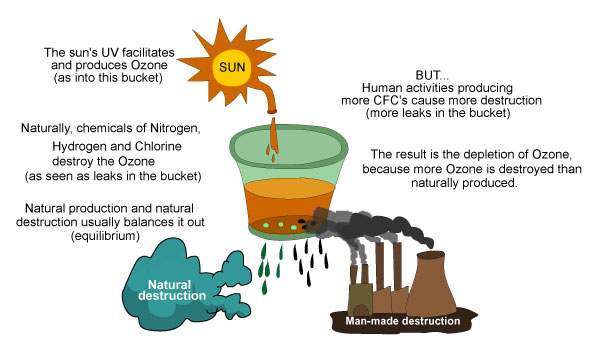 There are other Ozone Depleting Substances (ODS) such as methyl bromide used in pesticides, halons used in fire extinguishers, and methyl chloroform used in making industrial solvents.

Other chemicals that naturally destroy Ozone are Noy, Hox, Clx, which belong to the Nitrogen, Hydrogen, and Chlorine families.

Measurements of CFCs in the stratosphere are made from gas balloons, aircraft, and satellites.

Sadly, there is not a whole lot that humans can do to replenish the depleted Ozone, as it tends to recover slowly by itself. All we can do is to be more responsible for our manufacturing needs so that we do not introduce more CFCs into the air