Erosion is not the same as weathering. Weathering is the process where rock is broken down or dissolved into smaller pieces by the physical, chemical, or biological weathering process. 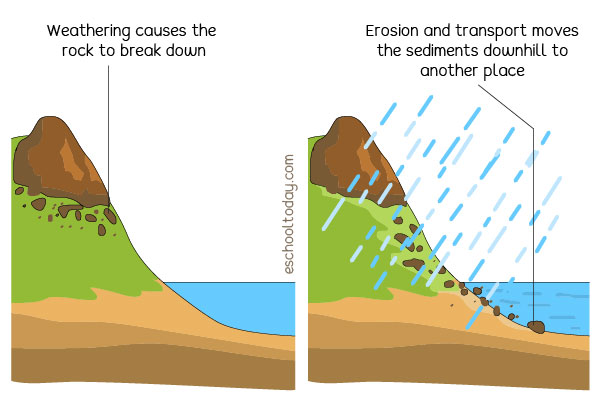 Erosion (or mass wasting) involves the movement of the weathered rock (now pebbles, sand, or soil) from one place to the other by the action of wind, ice, water, and gravity. Examples of mass wasting include rock falls, slumps, and debris flows

Transport makes erosion complete because it is the part that involves the movement of the eroded materials or sediments.

Transport by the wind:

Wind transport can result in stunning landscapes as sand is blown away from one place to another. In the deserts, dunes are created. Wind can also create sand storms and destroy farms by blowing away the topsoil of large farms.

Faster flowing rivers can carry heavier rocks or drag them along the riverbed. As the rocks move, they are smoothened by the abrasive effect. Transport makes that possible. Winds can also carry tiny rocks or sand and move them to other places.