When mountains are formed they are rugged, but after many years, they are flattened and weathered away. Where do all the eroded particles go?

Tiny debris (also known as sediments) from eroded mountains and rock masses, together with the sand and other particles are often washed down the slopes of highlands into water bodies. Sediments are often rounded or smoothened by the abrasion it undergoes as it moved with water and other sediments. The sediments slowly settle underwater in a process called sedimentation. 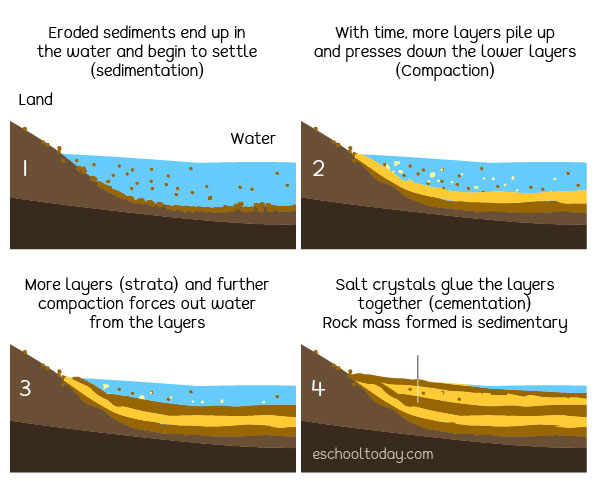 As years go by, layers of sediments that have settled under the ocean or water bodies, harden under the weight of the topmost layers and water. This process is known as compaction. Sometimes, organic matter and fossils settle in them too and are compressed together with the sediments. Compaction leads to cementation, which is the gluing or cementing of pieces of rock together by salt compounds. When these harden, they form sedimentary rocks.

During the formation of sedimentary rocks, massive amounts of vegetative and animal residue may be trapped in the layers. They go on to form carbon pockets in these rocks, which humans extract later on in the form of crude oil. Note that the formation of coal takes millions of years.

Sedimentary rocks appear in layers called strata. The oldest rocks tend to be at the bottom, with newer rocks above them. There are six main types of sedimentary rocks including conglomerate, sandstone, shale, limestone, gypsum, and breccia. Each of these has its’ own properties and characteristics.