Igneous rocks form when magma cools off. Igneous means ‘fiery’ (from heat or fire). Igneous rocks do not contain fossils or organic matter.

Below the earth’s crust, there is melted rock called magma. Magma remains in a molten form (liquid form) because of extreme temperatures (between 625 and 1200° Celsius) existing there. 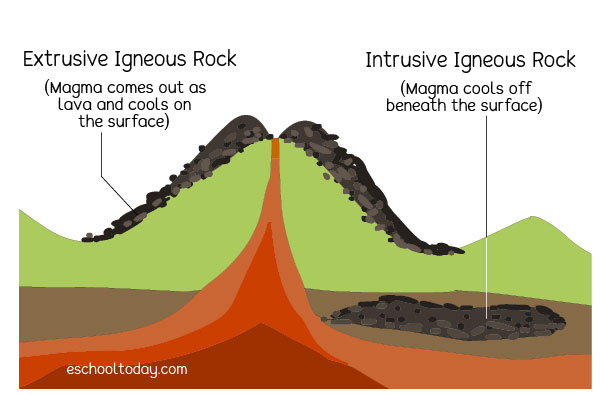 Sometimes magma cools off very slowly under the earth’s crust and solidifies into rocks. Granite and gabbro are examples of igneous rocks formed in this way. They are hard rocks. Slowly cooled magma produces larger crystals than fast cooling magma. These are known as intrusive igneous rocks because they are formed from magma underground.

During a volcanic eruption, magma may also pour out to the surface of the crust. Magma that has come out to the earth’s surface is called lava. Lava cools off quicker on the surface than below it. Rocks resulting from cooled-off lava include obsidian, lava rock, basalt, or pumice. These are known as extrusive igneous rocks because they are formed outside of the crust.

Here are some uses of igneous rocks:

Granite is used for building and construction because of its strong properties. It is also used for headstones and kitchen countertops.

Pumice is lightweight and has lots of air spaces. It is used by cosmetic and cleaning industries to make things like excess skin removing stones. It is also used in some toothpaste products because of its abrasive nature.