Hunger factsheet
Overall, there are improvements made in many countries with hunger. However, there are a few disparities.
221 million people in India and 142 million in China are still chronically or acutely malnourished. 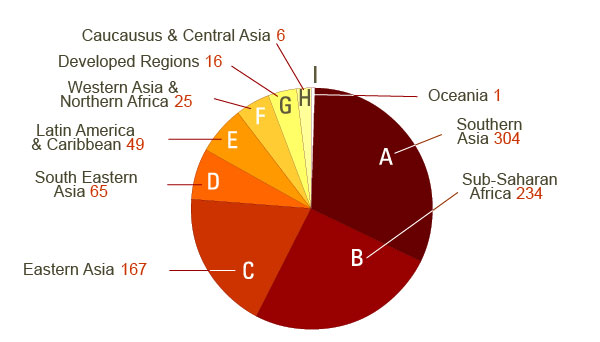 60%, of undernourished people, are found in Asia and the Pacific.
30% of infants born in South Asia in 2003 were underweight, the highest percentage in the world.

More than 100 million children under the age of five are underweight, and therefore unable to realize their full socio-economic and human potential, and that childhood malnutrition is the cause of death for more than 2.5 million children every year.
FAO, The State of Food Insecurity in the World (forward P4)

A recent study found that almost 80 percent of the population of 52 countries (mainly low – and middle-income countries) consumed less than the minimum recommended levels of fruits and vegetables. It was found that:

1. The prevalence of the population with below-minimum intake levels ranged from 37 percent in Ghana to 99 percent in Pakistan (the range was similar for men and women separately).
2. Fruit and vegetable consumption tends to decrease with age and increase with income.