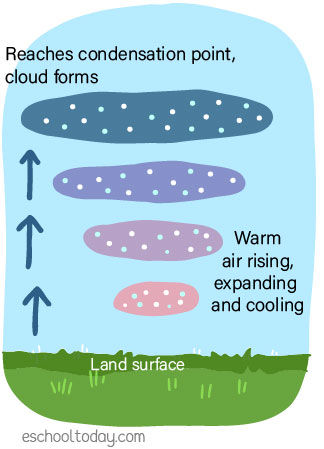 Anytime a block of air (called a parcel of air) is heated over the land surface, it begins to rise. As it rises and expands, its molecules spread out. As it continues to rise, it encounters decreasing atmospheric pressure, losing more heat. This cooling process is what we call ‘Adiabatic Cooling’. The reverse is ‘Adiabatic Heating’ where air descending through the atmosphere compresses with increasing pressure. Note that cooling by advection and radiation produces fog, frost, and dew, but clouds are formed by Adiabatic Cooling.