Every object is made up of matter (Matter is anything you can touch physically) The more matter an object has, the bigger it is, and the more mass it has.

Mass is measured in kilograms, kg, or grams, g. Things that have a big mass are harder to move. They are also harder to stop when they are in motion than objects with less mass.

Mass is how heavy something is without gravity. It means the mass of an object is the same on earth and in space (or other planets)

A 100gm ball will be 100kg everywhere, even on the moon. This fact is not the same for weight. The weight of an object can change at a different place, such as on the moon. 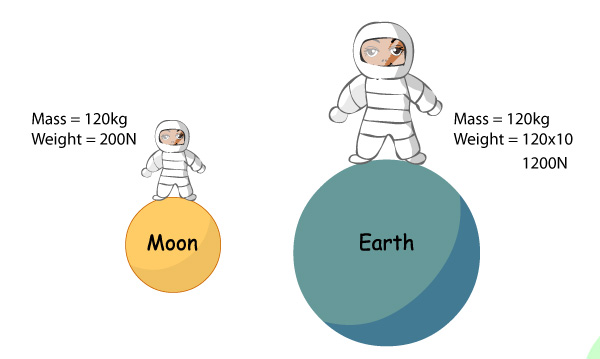 In the illustration above, notice how the mass of an astronaut remains the same, while his weight is smaller on the moon as a result of less gravity.

Mass is NOT the same as weight. The difference is that weight is determined by how much something is pulled by gravity. If we compare two different things to each other on Earth, they will both be pulled by the same gravitational force, so the one with more matter will weigh more.