Why do some people bully others?

Below are a few reasons why bullies behave the way they do: 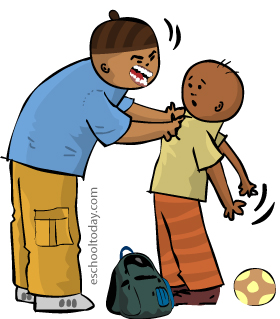 People can direct frustrations, hurt, anger and difficulty at home or in class to you by bullying.

Lack of attention from friends, parents, or teachers can make a person bully you, just to feel popular and seen as ‘tough’ or ‘cool’ and in charge.

Some kids have learned to bully others (parents, brothers or sisters, friends). They have seen them getting their way by being angry or pushing other people around. They believe that by putting fear in you, they will have the best shot at everything in school or your neighborhood.

Some people also do that because they are victims themselves.

Bad upbringing at home can make people insensitive to other people’s feelings and emotions. They are happy to see their classmate depressed, sad, and hurt.

Watching a lot of violent films (movies and TV) and video games can make a person try out violent things. They usually try them out on people who appear smaller or weaker to them.

Some young people are bullied for no particular reason, but sometimes it is because they are different in some way – perhaps it’s the color of their skin, the way they talk, their size, or their name.

Sometimes young people are bullied because they look like they won’t stand up for themselves.

Now let’s see what kind of people are usually bullied.