What is a Valley?

A valley is a low-lying landmass (a depression) that is bounded by higher grounds, often mountains and hills. A valley can just be the area at the foot of two mountains, but they can also run for many miles. Valleys may or may not have water in them. They can be U-shaped or V-shaped. The sides or walls of the valley may be steep or gentle sloping. The bottom of a valley is called the Floor. It can be flat or V-shaped too. There are different types of valleys, known by their features or by the way they were formed.

River Valleys:
Below is an illustration of a river valley: 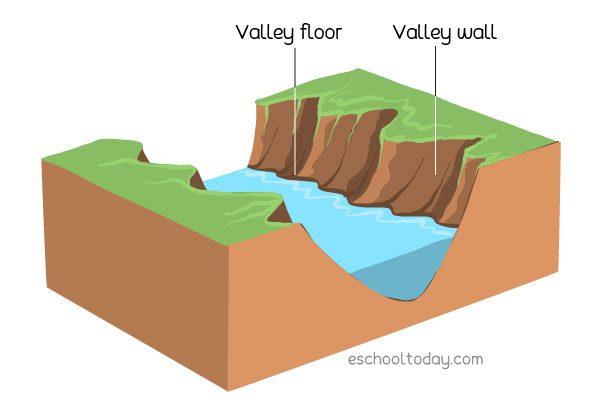 These are valleys with water flowing through them. Any time water flows on the surface of the earth, it can erode the land and the rocks along its path. With time, it carves out channels and forms a valley. Canyons are types of valleys too. The features of river valleys depend on the speed and power of the water running through it. It also depends on the mineral make-up of the rock over which the water is flowing.

Glacial Valley:
Glacial Valleys are also common in the North and south poles. They are usually U-shaped. Moving ice has tremendous power and this cuts through the slopes on which they slide. Sometimes they widen gullies along slopes and cut deeper through them. After the ice melts, dry valleys are left behind.

Our research for this topic included these sources: